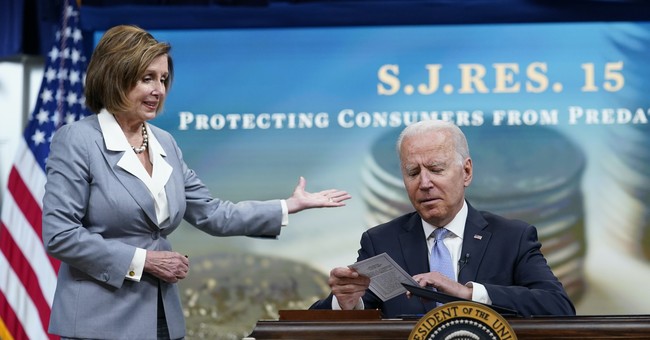 Nothing should be a bigger priority to politicians on the federal level than seeing to it that Americans and allies are taken safely out of Afghanistan, yet while Republicans are ready to go in, guns blazing, Democrats don’t seem to care much.

As I’ve written previously, it’s because they don’t. They’re already trying to memory hole it.

Case in point, Nick Arama reported earlier that Joe Biden is already heading back to his vacation, even as people are scrambling to clean up his mess and rescue the people still trapped in Afghanistan — as the Taliban go door to door, executing people.

But while Democrats seem to shrug at the mention of Afghanistan, the one thing they won’t tolerate is an interruption in the flow of babies being killed in the womb. With Texas’ recent passage of their abortion law, effectively banning most abortions, Democrats are flying into action and gearing up for a major battle.

According to The Hill, Nancy Pelosi said she’s mobilizing the House to vote on legislation that would override Texas’ abortion restrictions.

Pelosi said that after the House returns to session on Sept. 20, the chamber will vote on a bill from Rep. Judy Chu (D-Calif.) to statutorily protect a person’s ability to seek an abortion and for health care providers to provide abortion services. She called the Texas law “a flagrantly unconstitutional assault on women’s rights and health” and a “catastrophe.”

“This ban necessitates codifying Roe v. Wade,” Pelosi said, referring to the landmark 1973 Supreme Court ruling that prohibits states from banning abortion before a fetus reaches the point of viability, which typically is around 24 weeks of pregnancy.

“Upon our return, the House will bring up Congresswoman Judy Chu’s Women’s Health Protection Act to enshrine into law reproductive health care for all women across America,” Pelosi said.

Biden, who can’t be bothered to say anything about Afghanistan that doesn’t make it sound like a resounding success, is sounding off about looking into a federal response to the Texas abortion restrictions:

The White House on Wednesday said the proper recourse to ensure abortion access would be for Congress to codify Roe v. Wade. But Biden on Thursday signaled his administration would take unilateral action where possible.

The president said he was asking the Gender Policy Council and White House Counsel to “launch a whole-of-government effort to respond to this decision, looking specifically to the Department of Health and Human Services and the Department of Justice to see what steps the Federal Government can take to ensure that women in Texas have access to safe and legal abortions as protected by Roe, and what legal tools we have to insulate women and providers from the impact of Texas’ bizarre scheme of outsourced enforcement to private parties.”

A “whole-of-government effort” to respond to a state that effectively ceased the killing of children within its borders.

Again, where is this energy on the Afghanistan crisis? Why is there not a “whole-of-government effort” in getting Americans staring down the barrel of Taliban rifles (provided by Biden) out of the grasp of terrorists?

If you really want to know where Democrat priorities lie, here is just another in a myriad of examples showing us that they aren’t with the American people. It’s all about Democrat money flow and Democrat agendas. You can kick rocks.