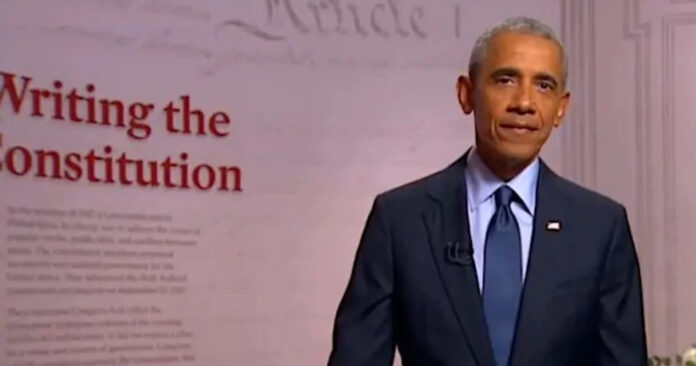 Joe Biden has told us all about the glory days of serving under Barack Obama. He has also pledged to take a very similar approach. Essentially, he ran on the platform of being Obama 2.0.

As the Biden administration talks about unity, Obama is sharing how he bloodied the nose of a friend when he was in school.

Barack Obama and Bruce Springsteen have decided to join forces to create a podcast on Spotify. Renegades: Born in the USA is a collection of conversations between the two as they talk about music, their lives, fatherhood, and the state of America.

Somehow, we’re supposed to be interested in what the former president of the United States has to say. We’re also supposed to look the other way at the person he’s partnered with – a washed-up rock star who was recently charged with drunk driving.

On one of the most recent podcasts, the former president recounts a story when a friend of his in school called him a racial slur. He “popped” the friend in the face and broke his nose.

Mind you, this is how Obama chose to deal with a friend. He made sure to identify that this was a friend with who he played basketball when growing up in Hawaii.

The slur? “Coon.” It was popularized as a racial slur in the 1800s because of the appearance and behavior of black individuals being similar to that of raccoons. However, there’s a long history of the use of “coon,” first being recorded in the 1700s to refer to someone who was a member of the Whig political party.

It is entirely possible that the friend was mistaken on the meaning of the word. The two were in a fight, and some things are said without giving any real thought to the impact it would have on a person.

Obama never mentioned whether he went on to apologize. He also never said anything in the podcast about how he handled the situation wrong or to encourage choosing a more appropriate behavior.

Are we supposed to stand by and allow a former president to essentially say that it is okay to use violence to handle a racial slur? Not all people understand that certain words are racial slurs. Some people may also realize that they’re a slur but not understand the emotional damage that can inflict on a person.

Unfortunately, the slinging of racial slurs is a part of society. It happens in low-income communities and high-income ones. In some instances, slurs are even used among people of color, which can confuse the issues even more in terms of appropriateness.

Punching a person in the face and breaking their nose, however, is not the way to handle the situation. It only establishes more violence and misunderstandings.

Biden is trying to establish peace and Obama is sharing stories of breaking someone’s nose over a racial slur.

Imagine how the liberal media would have lost their minds if Trump had talked about breaking someone’s nose.

When is it okay to violate someone’s physical space because of a verbal assault? The answer should be that it’s never okay. Yet, Obama doesn’t apologize. He did this to a friend. What if a stranger had used the racial slur, instead? Would he have chosen not to assault the person or would he have decided that the person deserved more than just a broken nose?

In a time when freedom of speech is being closely monitored, it seems that podcasts that encourage violent acts should be turned off.

However, Obama has and always will be the golden child of the Democratic Party. If they could have figured out a way to get him to run for another four years, they would have.

The liberal media will continue to allow him to speak out about how he handles racism. He’ll continue to talk about being a bully. It will only be unacceptable once someone bloodies a person in the streets and uses Obama as his defense.