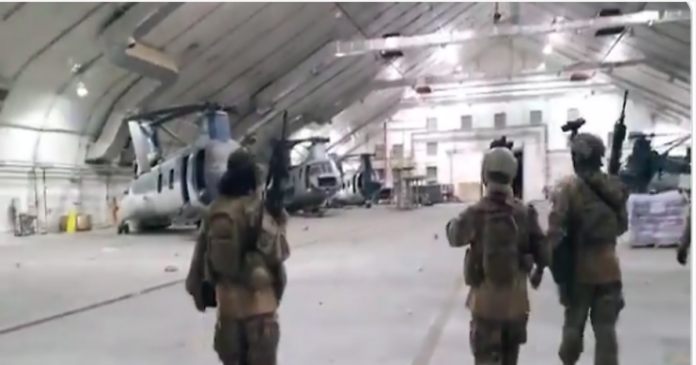 There has been a lot of talk about how much American gear and weaponry the Taliban picked up in the takeover of Afghanistan.

Some reports have put it at about $85 billion. This was from the Times of London.

The WaPo fact-checker questioned that high a number.

But it’s still obvious that they picked up billions worth, that is going to be used for bad reasons, and maybe even against us, in the future.

As we saw when the Taliban moved into the Kabul airport area Americans had been using, the Taliban came in sporting some of that gear and weaponry.

The Taliban getting the weaponry was earning Joe Biden a lot of criticism — that more of it wasn’t destroyed or prevented from falling into the enemy hands.

So it’s more than a little troubling to read that the Biden administration told federal agencies to scrub their websites of the official reports about the $82.9 billion in weaponry the U.S. has provided to the Afghan army since 2001 (which is now largely in Taliban hands).

The scrubbed audits and reports included detailed accounting of what the U.S. had provided to Afghan forces, down to the number of night vision devices, hand grenades, Black Hawk helicopters, and armored vehicles.

The State Department admitted to removing the reports but justified the move as a way to protect Afghan allies. According to a spokesperson:

“The safety of our Afghan contacts is of utmost importance to us. The State Department advised other federal agencies of to [sic] review their web properties for content that highlights cooperation/participation between an Afghan citizen and the USG or a USG partner and remove from public view if it poses a security risk.”

First, you left thousands of those “contacts” behind, completely burning them and leaving them to the Taliban.

You also gave lists of Afghan allies to the Taliban to supposedly help them clear Taliban checkpoints, an incredibly stupid move that put their lives at risk.

Don’t even try to go there now after the debacle that you left there for those poor people.

In addition, many of the removed audit reports merely quantified military equipment without identifying personnel. Here are two important examples:

#1. Government Accountability Office (GAO): OpenTheBooks.com reposted an audit of U.S. provided military gear in Afghanistan (August 2017) after it was removed from its official location.

#2. Special Inspector General For Afghanistan Reconstruction (SIGAR): OpenTheBooks.com reposted an audit of $174 million in lost ScanEagle drones (July 2020) after the report was removed from its official location.

As Forbes explains, “these reports do not include recipient information, and the Taliban already likely controls the war chest in question.”

So this is basically an excuse for what’s going on here — which would appear to be an effort to cloud how much of a mess this has really left us in. So not only is the Biden administration lying directly to our faces about what is going on in Afghanistan, they are trying to clean up the records as well.