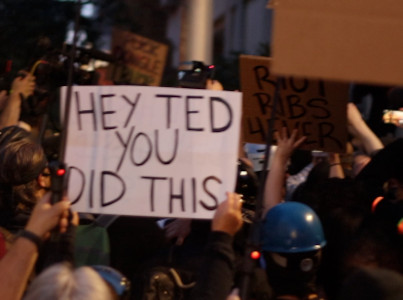 The liberal politicians of our country continue to prove that they are hypocrites. They make the rules but can’t bother to abide by them.

It’s getting hard to hear the “rules for thee but not for me” comment everywhere we turn.

We saw it with Governor Newsom when he went to a birthday party at a crowded restaurant.

We saw it with House Speaker Nancy Pelosi when she went to a hair salon.

We even saw it with Governor Whitmer when she traveled to Florida.

There were hopes that not all liberals were the same.

Well, Portland Mayor Ted Wheeler decided that he wanted to be a hypocrite like the rest. Perhaps he was feeling a bit left out of the club…

We all know that Wheeler is not the best mayor. After all, he handed his city over to Antifa rioters last summer. He allowed the riots to threaten citizens and cause millions of dollars of destruction to small businesses and city property.

With the Delta variant becoming a concern, Wheeler wants to be the voice of reason. The indoor face-covering requirement in Oregon is in full effect – and Wheeler tweeted out the message.

Wheeler specifically said “please join me” in making the commitment to protect those around us. When indoors, he wants people to wear a mask at all times.

When he said, “please join me,” it gave people the reasonable belief that Wheeler would be making the same sacrifice as everyone else. After all, it’s a hard sell if you aren’t going to follow your own advice.

Governor Kate Brown has made it clear about her thoughts on mask-wearing, too. Wheeler retweeted her message that said that masks are a “simple and effective way” to protect everyone from COVID-19.

We won’t even get into the argument that the indoor mask mandate is for everyone regardless of whether you’re vaccinated or not. What we will get into is the fact that Wheeler couldn’t actually be bothered to make the sacrifice.

The mandate was in effect when he was pictured having a meeting in a hotel lobby. There were at least six people in the meeting without masks in sight. And, most of them weren’t socially distanced, either.

Wait a second…why is the mayor allowed to break the rules?

According to his office, he was in compliance because they were “actively eating and/or drinking.”

Nope, we’re not buying that. Why? The photo is pretty clear. No one has a drink in their hand. Just because there are a few glasses of water around on the tables is not good enough.

As the office said, you have to be “actively” eating or drinking. There was nothing active about what was going on in the photo – which means that the mayor was in clear violation of the mask mandate.

This is not a great message that he’s sending. Basically, as long as you have water somewhere in your vicinity, COVID isn’t going to get you. The mask mandates don’t matter.

Hmmm…it sounds like a lot of people are suddenly going to be using the excuse that they were “actively drinking” if they are caught without a mask indoors.

Thanks, Ted Wheeler. We were beginning to wonder if you were a hypocrite like so many of the other liberal politicians around. You didn’t disappoint by confirming that you most certainly are hypocritical in your ways.