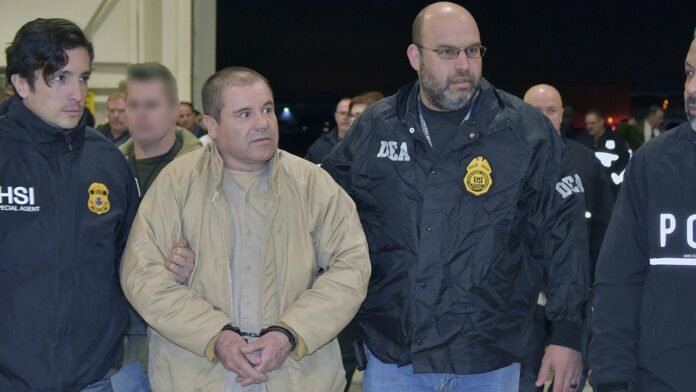 When Joaquin “El Chapo” Guzman was arrested in Mexico in 2016 and later extradited to the U.S. in 2017, the Mexico/U.S. drug underworld lost their kingpin. El Chapo’s cartel was a multibillion-dollar operation.

El Chapo was arrested by Mexican authorities in 2015 but managed to miraculously escape. But this had not been the first time he had managed to slip away. In 2001 he had escaped prison by hiding in a laundry basket.

It only stands to reason how he must have had some help with this escape since he was supposedly being kept under heavy watch. And he surely could not have run such a huge drug operation on his own, especially during his limited absences. No one person could have.

A 31-year-old former beauty queen who goes by the handle of Emma Coronel Aispuro, or Mrs. Guzman if you prefer, was just arrested in the U.S. for helping her hubby out. Coronel, who holds dual citizenship with Mexico and the U.S., was nabbed at Virginia’s Dulles International Airport.

She has not only been accused of helping her husband run his day-to-day drug operation but of also masterminding his elaborately planned 2015 prison break.

This time around Guzman managed to slip out under an entry leading to a shower where he conveniently dropped his soap and slid into a mile-long lighted tunnel. He then began pushing an awaiting motorcycle mounted on rails so as to remain quiet. Once upon reaching his destination, her cranked her up and sped away into the night.

Guzman is serving life in a U.S. high-security prison where he has remained since his extradition. As the leader of the Sinaloa drug cartel, he was held responsible for the shedding of oceans full of blood. Guzman had become somewhat of a legend in Mexico for his prison breaks and his keen ability to outmaneuver the law.

Guzman and his wife are the proud parents of two young daughters who are now looking for a place to live. Mama Dearest was just charged with conspiracy to distribute cocaine, methamphetamine, heroin, and marijuana. And this is only the first complaint to be filed by the Justice Department.

Once the U.S. is done with her Mexico may have a go at her for assisting in the 2015 jailbreak. If they don’t feel like messing with her, not to worry, our justice department will handle the task for them.

Guzman had a 25- year run as the most powerful drug lord in Mexico and perhaps even in the U.S. His cartel smuggled an unimaginable amount of cocaine, heroin, and marijuana into the streets of our cities.

Guzman let nothing and nobody get in his way. He employed his own army of hitmen who were well trained in the arts of kidnapping, torturing, and executing. These “sicarios” were under strict orders to remove anyone who interfered with his business. Anyone. Prior permission, not required.

Because of Mexico’s previous failures to keep Guzman under lock and key, serious concerns had been voiced by the U.S. Justice Department. These concerns are what had led to El Chapo’s extradition. We can all rest assured, Coronel isn’t going anywhere.

The happy couple tied the knot in 2007 and have a 30-year age spread. Their twin daughters were born in 2011. Keeping things in the family, Coronel’s father, Ines Coronel Barreras, along with one of his sons and a couple of other mean-spirited hombre’s, was arrested on the Mexican side of the border near Douglas, Arizona in 2013.

The men were handcuffed in a warehouse full of hundreds of pounds of marijuana. As a result of her father’s involvement as an alleged drug trafficker, the U.S. Treasury Department placed financial sanctions against him.

Mike Vigil, the former chief of operations for the Drug Enforcement Administration who knows the ins and outs of El Chapo’s legacy, said that Coronel “has been involved in the drug trade since she was a little girl. She knows the inner workings of the Sinaloa cartel.”

When asked if he thought there was any chance she may cooperate, Vigil replied, “She has a huge motivation, and that is her twins.”