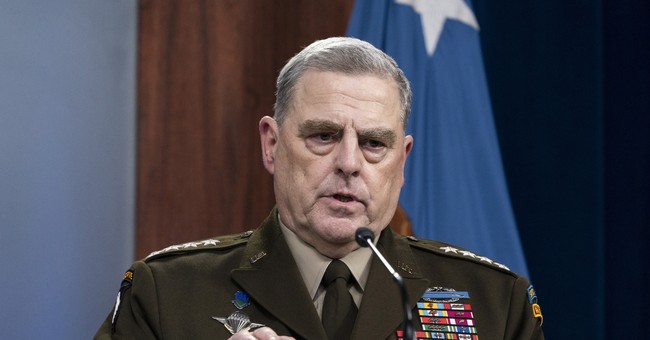 One of the persistent fictions about the botched and shameful withdrawal underway in Afghanistan is that the airport used as the focal point for our evacuation, Hamid Karzai International Airport (HKIA), was a better choice from any point of view than the US military hub at Bagram airport.

This is Chairman of the Joint Chiefs of Staff General Mark “Gimme Some White Rage” Milley from Congressional testimony on August 18.

GEN. MILLEY: On your question of Bagram, securing Bagram, you know how big Bagram is. You’ve been there many times. Securing Bagram is a significant level of military effort of forces, and it would also require external support from the Afghan Security Forces.

So we had to collapse one or the other, and a decision was made. The proposal was made form CENTCOM commander and the commander on the grounds, Scott Miller, to go ahead and collapse Bagram. That was all briefed and approved, and we estimated that the risk of going out of HKIA or the risk of going out of Bagram about the same, so going out of HKIA — was estimated to be the better tactical solution in accordance with the mission set we were given and in accordance with getting the troops down to about 600, 700 number.

Some cracks in this story appeared almost immediately. Milley claimed that the local commander made the recommendation. But, to date, he has not acknowledged having a role in the decision. This is from former Ambassador to Germany and Director of National Intelligence Richard Grenell:

This is not idle Monday morning quarterbacking. The evacuation fiasco is a direct result of choosing HKIA.

Kirby’s description of the size of Bagram, which American forces substantially expanded after 2001, underscores exactly why it could be so useful for supporting evacuation flights. The facility, which U.S. forces are intimately familiar with after having used it as a major hub for operations for nearly two decades, has two large runways and a host of other supporting infrastructure. Bagram, which is situated some 30 miles to the North of Kabul, also has the benefit of a much larger and more readily defensible perimeter that isn’t inside an urban area.

If Bagram could be opened and operated in a secure manner, even in a contested environment, it could be possible to shuttle in evacuees from Hamid Karzai International Airport, offering an immediate way to relieve the current logistical strains imposed by conducting evacuations flights from a single airport. In addition, the base could present a valuable fall-back location to continue evacuation operations should the security situation in Kabul continue to erode, and that could be maintained after Aug. 31.

In short, Bagram has more facilities, is more secure, and is easier to keep secure than HKIA. At Bagram, the mob scenes at ingress points to HKIA would have been avoidable. The 30-mile separation between Kabul and Bagram would have enabled much better management of refugees and provided much more physical security than being located close to a major city. A second runway would have allowed for more planes in and out, and it would provide a staging area for air assets to defend the airfield.

None of this is rocket science. And yet, here we are. Some answers may have been provided on Laura Ingraham’s show yesterday. The guests were three Republican Congressmen, Mark Green of Tennessee and Mike Waltz and Brian Mast of Florida.

BIDEN: I asked for their best military judgment. What would be the most efficient way to accomplish the mission? They concluded the military. The Bagram was not much value added. It was much wiser to focus on Kabul. And so I followed that recommendation.

INGRAHAM: Is it just me or was Joe Biden speaking at like three paces too slow? It’s too slow today it was weird. It just comes across as weird. Like he’s totally disconnected from the content of what he’s saying. But Congressman Green, given all your experience, how critical of a mistake was it for us to abandon Bagram Airbase?

REP. MARK GREEN (R-TN): Well, thanks for having us on, Laura. It was a huge mistake, one of the biggest mistakes in our nation’s military history. But it was Joe Biden, who made that decision. I know for a fact that the military advised him not to leave Bagram.

He said we’re going to downsize to 600 Marines. And the leadership told him we can’t hold Bagram with 600 Marines. He said, I don’t care go to 600. He arbitrarily picked a number out of the sky. And they couldn’t hold that base with 600. So they collapsed to Kabul.

This is Joe Biden, and his incompetence that made that decision. And that decision is what cost those lives today. The perimeter around that base is a street wide. That’s it. But out of Bagram, you had kilometers of range that you can see the enemy coming. But not when it’s just a street in the middle of an urban area.

It’s a horrible decision. It’s 100 percent Joe Biden’s and that’s not the first lie this guy has told or I should say he’s totally disconnected from the truth, many, many other lies, and it just he needs to step down. He needs to resign or the cabinet needs to do something.

WALTZ: Laura, can I just jump in that on that point —

WALTZ: -on that Bagram point because we were just briefed by the military yesterday on the Armed Services Committee, that when we went back in to evacuate the embassy, they were once again presented Joe Biden with the option of taking Bagram. And he once again didn’t choose to do so.

So, on the one hand, he didn’t listen about shutting it down too fast. By the way, 5000, hardened ISIS, Al Qaeda and Taliban prisoners are now on the loose, and then he didn’t listen when they had to go back in to evacuate our Embassy after the after the collapse of Kabul.

And now he’s tying the hands of our special forces who are chomping at the bit to go out into the city and outside of the city to get our Americans that are stranded. He won’t let them do that either. Their hands are being tied. So this is just incompetence. And it’s just outrageous.

What they are saying they were told by Defense in briefings is that the military wanted to use Bagram. That would entail deploying additional troops from the US to Afghanistan to secure a much larger perimeter. Biden vetoed the recommendation and imposed an artificial limit of 600 troops. Six hundred may sound like a lot, but 600 men can barely defend themselves, much less secure checkpoints and process refugees when you are deep inside of enemy territory.

Congress really needs to get to the bottom of this. If Biden did make the decisions that led to Americans being killed and left behind, he needs to be held to account.

Be all that as it may, nothing Joe Biden did gets the military off the hook. Because the senior military leadership is as woke as your typical liberal arts college gender studies department, they went along with Biden. Yesterday, a Marine battalion commander torched his own career to protest the lack of integrity, loyalty, and candor on the part of the senior leadership of the Marine Corps and the US military (see This Marine Battalion Commander Probably Burned Down His Career to Demand Accountability for Chain-of-Command Failures in Afghanistan). LTC Stu Scheller had this to say:

And I’m not saying we’ve got to be in Afghanistan forever, but I am saying: Did any of you throw your rank on the table and say, “Hey, it’s a bad idea to evacuate Bagram Airfield, a strategic airbase, before we evacuate everyone.” Did anyone do that? And when you didn’t think to do that, did anyone raise their hand and say, “We completely messed this up?”

A lot of senior officers knew this was a craptacular decision. I’ll bet that if you could listen in on the secure calls between them right now, they’d all be saying, “I told him that was going to happen.” And yet, when push came to shove, when it came down to nut-cutting time, when the time came to make that choice between career and the safety of troops, they all took career. That’s shameful. As a nation, we deserve better.