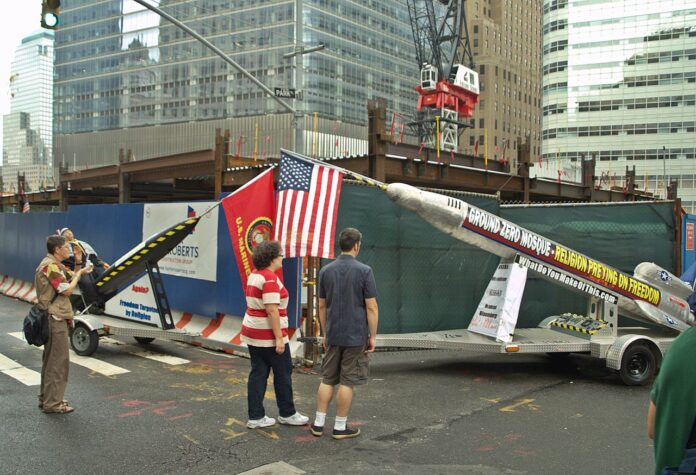 In 2017 an Illinois anti-government militia set off a pipebomb at Dar al-Farooq Islamic Center in Bloomington, Minnesota. Their plan of killing and mutilating the people inside was foiled by the militia’s lack of expertise in such matters and no one was hurt.

The groups’ bearded rough and tumble leader, Michael Hari, 49, was tracked down and arrested but pleaded not guilty to a stack of civil rights charges and to committing a hate crime. Other militia members who were arrested all testified that it was Hari who masterminded the attack and they just fell in line with it. Their purpose was to “scare Muslims” into going back to where they came from.

The militia, known as the White Rabbits of all things, said it was Hari who rented a U-Haul truck, filled it up with pipe bombs, guns, ammo, and other essential gear, and drove the 500 miles to Bloomington. Long story short, Hari lost his case and got the book thrown at him. He was found guilty on five counts of this, that, and the other thing, and was put away, but his final sentencing is just now coming around.

Hari is now claiming to be a changed man in more ways than one. Now 50, he’s decided that changing his gender to better suit who he believes he is inside would be in his best interest. May we introduce you to the new and improved, Emily Claire Hari.

Hari’s trying to blame his confusion on gender dysphoria and the right-wing propaganda that led her to have “inner conflict.” So not only does she now want to be recognized as the opposite gender of his factual birth certificate, but he also wants it widely known that she is now quite the liberal lady. Who’s confused? We’ll just call him she from here on out for simplicity’s sake.

Shannon Elkins who was hired as Hari’s defense attorney, said, “She strongly desired making a full transition but knew she would be ostracized from everyone and everything she knew. Thus, as she formed a ragtag group of freedom fighters or militiamen and spoke of missions to Cuba and Venezuela, Ms. Hari secretly looked up ‘sex change,’ ‘transgender surgery,’ and ‘post-op transgender’ on the internet.”

The purpose of all this is to allow her to spend the anticipated 30 years to a life sentence that’s soon to be handed down, in a women’s prison where she’ll feel more comfortable and at ease, regardless of the kickstand she’s still toting around.

Elkins said Hari’s been living two different lives. She looked like Rambo in the military fatigues and battle gear she wore for the bombing expedition. But Elkins claimed she had also, just prior to her arrest, purchased a female wardrobe for an impending trip to Thailand for a final slice and dice into womanhood.

Federal prison is no playground and after pulling this way too obvious stunt, Haris isn’t going to have an easy go of things no matter which prison the judge sends him to. Leaving the issue alone would have been his best move but this is now something only the experience he doesn’t have is going to have to teach him.