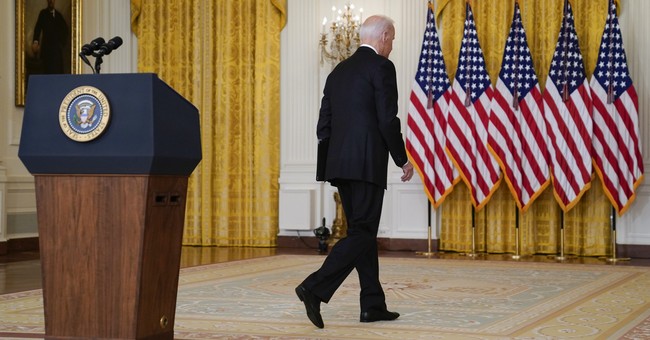 If it feels like the world, at least in relation to the United States and her interests, is collapsing, that’s because it pretty clearly is. Whether talking domestically or abroad, the Biden administration is in a freefall unlike anything we’ve seen since the waning months of George W. Bush’s presidency, and at least he was a lame duck. That the abject failure we are witnessing now hasn’t even taken a year to materialize is jarring at best.

It wasn’t supposed to be like this. For the better part of two years leading up to the 2020 election, we were assured that be that Joe Biden was the competent moderate we all needed. How great would it be to have a “normal” president who was truly an “expert” on various issues of policy, they asked rhetorically. The return of decorum and competency to the White House was going to be a religious experience.

Yet, here we stand in the midst of the most complete implosion of American stature and capability in my lifetime because Joe Biden flew too close to the sun.

Arrogance has been the downfall of many great men, but it’s been the downfall of far more terrible ones. Biden falls into the latter category, having taken office with the disadvantage of being a barely sentient human being. Whatever ability he once had, and he never had much, had dissolved into nothingness by the time he placed his hand on the Bible in late January of this year.

But instead of operating within the confines of the reality staring him in the face, the president decided to strip naked, smear himself in honey, and run through bear country. Predictably, things are going badly.

Take the disaster now turned tragedy in Afghanistan as the starkest example. Biden shouldered essentially no political risk in following the original plan of an orderly, conditioned exit prior to the Taliban’s fighting season. But for the president, garnering a photo-op on 9/11 while being able to claim it was “his” plan that succeeded became the priority. Thus, the withdrawal was postponed for purely political reasons, the Taliban gained time to amass and plan an assault, and our evacuation of American civilians didn’t start until after Afghanistan had already fallen to terrorists.

All Biden had to do was enjoy a leisurely flight over the countryside. Instead, he climbed higher and higher, drunk on hubris until at least 13 American soldiers were murdered, his presidency now falling in on itself like a burned-out star.

Domestically, things are no better. When Biden took office, he was handed an organic recovery requiring only an executive willing to not screw it up. That was a bridge too far for the president, though. It wasn’t enough that he was going to reside over and get credit for an economic boom he wasn’t even responsible for. His arrogance simply wouldn’t let him stop.

So what did he do? He proposed and ultimately signed a massive $2 trillion “rescue” plan, most of which was completely unnecessary, that sent the economy into stagnation while dumped crushing inflation on the middle-class.

Again, just like with Afghanistan, all Biden had to do was do nothing. He could have been the risk-averse, moderate hero that Americans had foolishly convinced themselves they needed. But senility mixed with arrogance is a heck of a drug, and the president is doing lines on a daily basis.

For that, many more will suffer.