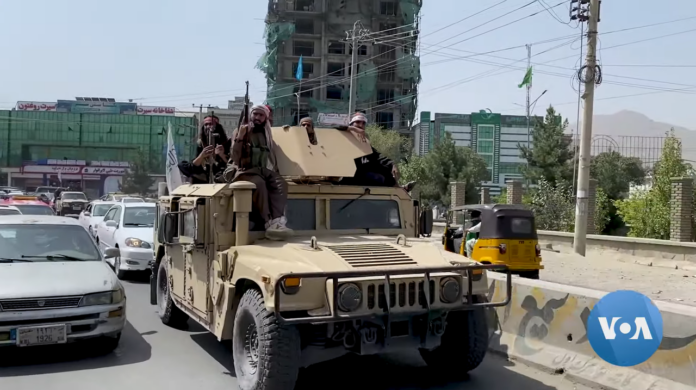 The Taliban are fond of boasting. Each time they claim victory in a new province, town, or village, they make certain word gets out to the rest of the world. They want you to know they’re coming for you next, wherever that might be. The biggest bang for the buck has always been the worldwide web. Until now. The Taliban has gone silent.

The Taliban uses their websites to deliver official messages to Afghan citizens and to brag about their victories. At the snap of a finger, the sites that broadcast in the languages of Pashto, Urdu, Arabic, English, and Dari, mysteriously vanished.

A content delivery network based in San Francisco has had the responsibility of protecting the site from hackers and malicious malware attacks. The company, Cloudflare, isn’t talking. They won’t answer their phone and they have yet to respond to any emails. Cloudflare provides a shield that prevents the nosy public from knowing who hosts the Taliban sites.

The sites going offline could simply mean that the Taliban is searching for a new web host, or that they’re going to undertake the task themselves since they finally have actual brick and mortar to house the necessary equipment. Cloudflare could possibly provide the answer, but they won’t.

Oddly, WhatsApp gave the boot to a number of Taliban groups on the same day as their sites went down. Facebook, who lock, stock, and barrel, owns WhatsApp, immediately pulled all Taliban pages from their site when Kabul fell. Why they allowed the pages in the first place is another story for another time.

When contacted, all WhatsApp spokesperson Danielle Meister would do was to refer inquiring minds to an earlier vague statement. The statement said they were “obligated to adhere to U.S. sanctions laws. This includes banning accounts that appear to represent themselves as official accounts of the Taliban.”

The Taliban of today is a far cry different than the group the U.S. drove out of Afghanistan twenty years ago. They’re tech-savvy and they know the value of a strong online presence.

SITE Intelligence Group tracks and investigates online extremism. Director Rita Katz said the Taliban’s presence serves to “inspire and mobilize” other Islamic extremists groups, including al-Qaida. “Tech companies should do what they can to get ahead of this problem as soon as possible, as the group’s online presence is stoking a newly emboldened jihadi movement worldwide,” she said.

Twitter hasn’t lifted a finger to help with silencing the evil tyrants and they don’t plan on doing so. Taliban spokesperson, Zabihullah Mujahid, has over 300,000 followers on Twitter. Regardless of their horrid real-life activities, as long as the Taliban don’t glorify or incite violence on their site, and they follow the rules, Twitter says they’re free to spread as much jihadist propaganda as their heart’s desire.

For reasons beyond mere mortal comprehension, the Taliban are not designated as a terrorist group, meaning there are no specific laws against allowing their online presence in the U.S. Being heavily sanctioned still leaves it up to the media company to care enough about their country to do the right thing. Companies like Twitter and Cloudflare…

The Taliban have claimed there will be peace in the streets of Kabul while at the same time shooting, stabbing, and beating up any civilian who dares cross their paths, women, and children not excluded. This brings the word narcissistic to mind. If the definition could ever be applied to an entire group the Taliban certainly win the award.

And it’s been proven time and time again how the easiest way to deflate a narcissists’ ego is by ignoring them. Be assured, the Taliban’s web presence will reappear as quickly as it went away. When it does, it’ll be stronger and it will reach far more people of different languages.

This doesn’t mean that their long arm needs to penetrate the U.S. as it has in the past, and in some cases still does. This can all be solved by officially declaring the Taliban to be the blood-thirsty tyrants they are, and mandating a total media blackout of everything Taliban-related.

Wake up, Joe. You need to read this article. Maybe if enough of you share it… Please do.