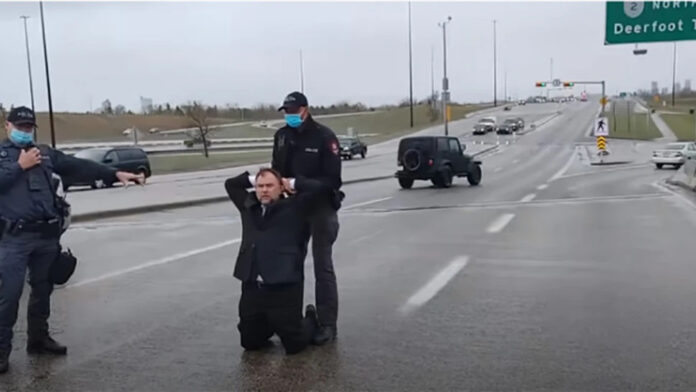 Liberal nonsense is plaguing every nation around the world. The movement is the true pandemic on the world’s stage. The Democratic Party is the ringleader of the movement as they splurge their poison all around the country. They target children in an attempt to brainwash them into believing their tenacious ways are the norm. And they even hurt people when they don’t get their way.

The COVID-19 virus gave them precisely what they needed to use on their behalf to grab power and to change the usual way of life for every living soul. But one pastor in Calgary, Alberta, is speaking out now that he is facing jail time for standing up for the right to worship. And his message is somewhat sobering to hear.

His message tells of the enemy that is running ramped through America and other countries. The communism that he escaped from has spilled over the west, and it is not backing down.

Artur Pawlowski is a paster who attended a prayer rally in Portland, Oregon and witnessed the attacks. Antifa would flood through the event with tear gas and brutally beat attendees. They would destroy the equipment before mocking God. And the entire time, the liberal-run police force sat by and watched.

Joe Biden and his communist administration have opened the door to the same horrors in Canada. Religious liberties are disappearing, and it has already been seen in Oregon.

His government sent health inspectors to his church to inspect during their worship time. They could have come during the workweek, but they were there to make a statement and shut down his church. The government was ticked off that he was holding services during lockdowns that they showed up in force to kick everyone out and shut the doors.

His hometown police showed up later with permission to use force if necessary. They were there to make the pastor submit to their authority. Pawlowski would later be arrested on his way home from church. The police knew where to capture him, which means they were busy watching his every move.

The same tactics have been seen in New York and California, where liberal progressive governors tried to shut down churches and keep them from having services. The matters would end up in the courts, where the liberals would lose. The Democrats need to liberalize the courts to effectively take over and socialize the last land of freedom in the world.

All of these areas are under attack in America. The Democrats know that for socialism to rise, they must control the basic structures in America.

He went on to note that of the press.”

“For disagreeing with government, for just simply sharing your heart about something that you have seen or heard, you could be tortured, arrested, beaten, sentenced to years in jail time — just because you had a different opinion than the State government.”

Liberals already physically attack innocent bystanders for having an opinion that is different than that of Joe Biden. The roots of communism are out in the open because Biden sits in office. He is a friend of socialism and will see to it that it rises wherever it can.

The silly attacks that Biden is making on freedom are just the bold start of a fight that will grow unless the American people remove the liberals from their seats of power. Republicans are the enemy of social control. They stand in the gap to keep the evil that Pawlowski speaks about from gaining ground in America. People love living free, and they are sick and tired of being treated like the enemy by liberals that think they have a right to control people.