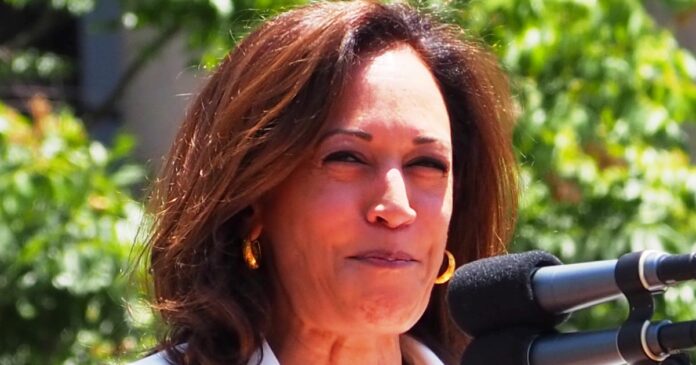 Harris loves sitting in the vice president’s office. She sees herself as finally arriving at something worthwhile in her sorry life. The thought process that was left unspoken by the Democratic Party was that at some time in Biden’s short future, Kamala Harris would take over by decree of the fanatical Nancy Pelosi.

Harris was considered the duo’s brainchild as they fake their way into the White House. But now that she has shown how idiotic her statements are and how unorganized and clueless she is, no one wants her around anymore.

Democrats across the board are thinking through the mistake of having her to be the vice-presidential choice for crazy man Biden. Harris is a disaster waiting to happen. And now that the thought of her impeachment is leaked out, many are hoping the Republicans take over the House in 2022 just so they can get rid of Harris.

Watch Harris’ entire trainwreck-of-an-exchange on schools. She basically admits they have no plan whatsoever, aside from overruling the CDC on teacher vaccines.

Her new goal: “open as many as possible”

Props to @SavannahGuthrie for not letting her boilerplate her way out. pic.twitter.com/0ecW0NunGe

Her sad presence just begs for jokes to be told about her. Her flip-flopping performance on many issues has made her to be unreliable with sticking to decisions. Harris says one thing and then a few days later reverse course and heads in another direction.

At least Joe Biden has an excuse for the way he changes his mind. But Kamala Harris and even Jen Psaki have nothing they can blame their flipping on. The only thing that people can think of is that they want to go down a highly popular path. So, when that course changes, their support will move as well.

Harris may a little more subtle at changing her direction, but she shows it all the time. She avoids providing concrete answers on just about everything that comes her way. She does not want to take a stand on anything because she fears a loss of popularity.

The way that Harris campaigned for the election was an absolute circus of a show. The horrible politician could not get any facts straight and certainly could not stand the thought of being in second place. But that is precisely what she is as the vice president.

The media has gone into overtime to try and protect her image as they have for Joe Biden. They try to make her out to be a saint and national treasure when in fact, she is a national disaster.

It is easy for the media to praise the worthless as they do it all the time. They awarded a killer in New York an Emmy for killing elderly people by infecting them COVID-19. And now that Cuomo has been exposed, they are willing to try and help him cover up his tracks so he is not caught.

No matter what anyone says about Kamala, Harris is some kind of saint who will never help her serve as vice president. She has turned out to be a person that no one wants to look up to as an icon. Her awkward presence and revolting voice sicken even the bravest of people that try and listen to her worthless words.

Harris is also a person that loves to dodge responsibility. She cannot bring herself to make a decision or provide an opinion that would help schools open faster. Instead, she bows to the teacher’s union and ignores science that is screaming that it is time to lift the pandemic status sitting on American soil.

President Trump was a man that was not afraid to own up to his decisions. When he made a decision, he stood by it all the way to the end, even when the media mocked him for it. He was the one that lived up to what he promised the American people, which is more than Biden or Harris have ever done. All they do is break their promises and sit in their chairs, acting like they are doing something.